The Eradication of Schizophrenia in Western Lapland 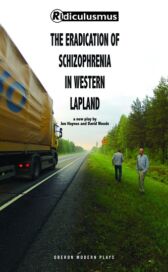 And an audience split in two - each experiencing auditory hallucinations

The text is syncopated and harmonised throughout with duets on words and phrases, cooking up a dizzying concoction of memory, delusion and reality that culminates in a unified third act of denouement set between the past and present

A denouement that is the defining moment of the protagonist's life

A world where dialogue can transform your life

"Embedded here is an argument for a different treatment for mental illness, practised in Finland, that embraces dialogue with a community, not just a patient ... a startling piece of work that challenges how you listen and fathom what you hear"' ★★★★ ~ Guardian

" .... intelligent, formally liberated and bloody peculiar ... as both seriously thought-provoking and seriously funny theatre, it sees Ridiculusmus (remaining) at the very top of their game" ★★★★ ~ Exeunt Magazine

Ridiculusmus has been producing seriously funny theatre for over 20 years

The company is led by David Woods and Jon Haynes, who write, direct and perform

They've since evolved to establish the Company as a flagship performance group, touring nationally and internationally with works passionately wrought from minimal resources, aiming to be both serious and funny