The Emperor's New Clothes or Five Beans For Jack 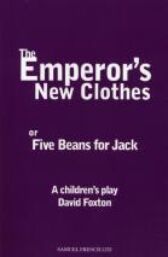 Large Mixed Cast
Tom "Tink" Bell is the town crier - not a "boo-hoo" crier, but a "yoo-hoo" crier!

Unfortunately he's prone to making mistakes, and when he accidentally announces that celebrations for the Emperor Persimmon the Twelfth's birthday will take place every Friday, sure enough the Emperor insists that that is what must happen

Soon the town is on the brink of bankruptcy from the cost of all the festivities, and two tricksters, Sly and Wily, have convinced the emperor to spend even more money on a new outfit that they claim only very intelligent and powerful people can see

Sly and Wily have also tricked Jack into parting with his beloved cow in exchange for five "magic" beans, but can Jack save the town by retrieving the gold at the top of the beanstalk?

And what will happen when the emperor appears in his brand new "birthday suit"?

Tom Bell, the town crier, known to all as "Tink"

Aloysisus Sly, a rogue and confidence trickster, partner to Wily

Abacus, the Treasurer to the Court