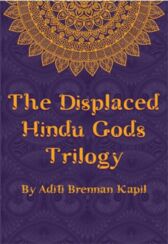 This trilogy of plays is loosely based on the Hindu trinity of Brahma the Creator, Vishnu the Sustainer and Shiva the Destroyer

The deities are displaced into contemporary immigrants in the West, creating a new cosmology for the Indian diaspora, immigrants and anyone who doesn't fit into the space that society has prescribed for them

And, while they can stand alone, they also coexist in a common universe where displacement, identity, post-colonialism and puberty are explored through the lenses of creation, survival and destruction

This is a stand-up comedy routine that takes on history, mythology, gender roles and high school through the inimitable comic lens of Brahman/i, a performer tethered by neither gender nor culture

The Chronicles of Kalki - M1,F3

A comic-book infused girl-gang thriller chronicles the adventures of Kalki, a young girl who may or may not be the final avatar of Vishnu, come to rid the world of demons and evil

A theatrical science fiction fantasy exploring the psychological residue of post-colonialism as a young woman embarks on adventure and romance and searches for her future on a bent-up old mattress she uses for a ship.

Each play runs about 90 minutes

"The trilogy is expansive and bursting with energy, each play exploring the inherent symbolism of the deities of the Hindu Trinity - Brahma the Creator, Vishnu the Sustainer, and Shiva the Destroyer - through the lens of human stories ... These plays reach for something deeper, something rooted within everyone who has ever struggled with identity and the need to belong in the world" ~ DigBoston

"Kapil's fertile imagination is running riot, comic one moment, enlightening the next ... The styles are comedy, high-school noir and magical realism. But the struggle for self-definition is always at the heart of Aditi Brennan Kapil's Displaced Hindu Gods Trilogy" ~ The Boston Globe

"After Brahman/i goes for the funny bone and Kalki for the adrenalin glands, Shiv is a play aimed straight at the heart. And it feels as if it's the one closest to the playwright's heart. All three stories are very different in style and tone, but they all have a smart sense of humor driving them, which makes them entertaining as well as thought-provoking" ~ Twin Cities Daily Planet

"Kapil's work has been seen throughout the country and earned plenty of accolades, but the sheer audacity of creating, presenting, and pulling off three high-quality brand-new works is what makes her a clear choice for a local artist of the year honor" ~ City Pages