The Demise of the Downhome Dealers - An Interactive Murder Mystery Game 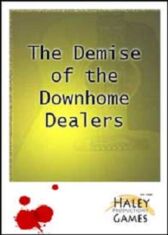 Major Country and Western stars Dixie Diver and the Downhome Dealers have come home to Mossy Bottom, Texas for a special concert and to announce the signing of their new contract with Belle Buford and Good Ole Boys Records. (No singing required - unless you want to)

EIGHT PRIMARY SUSPECTS (these have full knowledge of the mystery - you'll give them a complete script):

DIXIE DIVER: The lead singer. She's talented and beautiful and wants the world to revolve around her. She did something last night that most of the band members aren't gonna like

DAVE DIVER: Dixie's brother and fellow band member. He's been pressing her to be the "Donny and Marie" of the new millennium with him, much to her embarrassment. He'd give up the band in a heartbeat if she'd only agree to his plan

DAN DAWSON: Dan plays the guitar and sings. He is a moody, arrogant bad boy through and through

DICK DELANEY: Another band member. Not the smartest man. Okay, he's slow and stupid. He's also madly in love with Dixie but it's entirely unrequited

BELLE BUFORD: She works for Good Ole Boys Records. She'd still be selling vacuum cleaners door to door if it weren't for the band. Of course, Belle remembers it differently: The Dealers would be nowhere without her, despite their musical talent. She is sure they'll sign a new contract with Good Ole Boys. They'd better ...

SAVANNAH RANDALL: Savannah, since being dumped by Dan Dawson 2 months ago, has become a fledgling Hollywood agent. She's here to sign her cousin Dixie to a 3-picture movie deal. Yes, it'd break up the band but it'd also be sweet revenge on Dan

MERCY BLOOMER: Dixie's personal assistant. Nerdish, eager to please, much abused by Dixie and the band but that doesn't stop her from giving 110% to her job. The question is - how far can she be pushed before she breaks?

BUBBA McCOY: The band's security man. Very tough except when it comes to Mercy for whom he has a protective soft spot

SECONDARY SUSPECTS (Optional. Remember, EVERYONE will be actively involved in this mystery because it will be their job to solve the case and because you'll be encouraging them to come in costume and in character

Use any or all of these secondary suspects if you have "extra" cast members you want to use. You will NOT give them a script but you will give them a description of their character and let them run with it):

The other band members' groupies - It'd be fun to have them fight over who's the cutest, etc

Lola Jennings: A magazine writer, writing a story on the Dealers

Otis Cochran: The Dealers' lawyer - He can run interference between the band and Belle