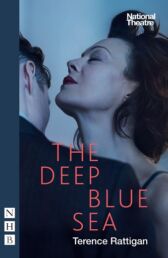 Large Mixed Cast
Rattigan's devastating masterpiece is a classic study of forbidden love, suppressed desire and the fear of loneliness

But at its heart it's a deeply moving love story ...

And with it comes a portrait of need, loneliness and long-repressed passion

First performed in 1952, The Deep Blue Sea was revived at the UK's National Theatre in 2016, in an acclaimed production directed by Carrie Cracknell and starring Helen McCrory as Hester.

★★★★★ "All these years later, [Rattigan's play] still fascinates" ~ The Times

★★★★★ " An extraordinary re-reading of [Rattigan's] best play a revelatory revision of a classic; a feminist reading that proves Rattigan was miles and miles ahead of his time' ~ Whatsonstage

★★★★ "A powerful portrait of emotional turmoil" ~ The Guardian

★★★★ " ... a devastating portrait of a woman adrift on love's ocean, desperately afraid of loneliness and blighted by the social conventions of the early Fifties" ~ Evening Standard