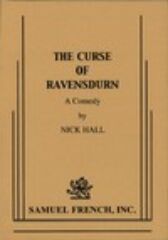 This full length play is comprised of six short plays in two acts ...

These six short plays tell the history of the most hideous, hilarious stately home in England