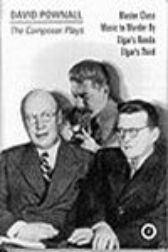 Master Class was first performed at the Haymarket Theatre, Leicester before transferring to the Old Vic

Elgar's Rondo was performed by the RSC at Stratford-upon-Avon in 1993, and at the Barbican Centre

Elgar's Third, winner of the Sony Gold Award, was first performed on BBC Radio 3 in 1994