The Complete World of Sports (Abridged) 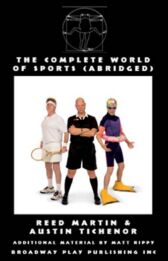 No problem - all the Works in just two hours

Same with the Bible, Great Books, American history, and Hollywood

The Complete World of Sports (Abridged) is an audience-interactive, family-friendly show for all ages ...

Littered with hilarious one-liners, witty puns and a jolly dollop of audience participation, this crazy show promises to take up "every single sport ever played on every continent"

And it more or less does

Some of the sports mentioned are obscure to the point of possibly being fictitious, such as extreme curling and cigar boxing

But none escape the comic scrutiny of the RSC

"A fast-moving and deeply funny farrago, a neo-vaudevillian sendup that manages to be both merciless and affectionate" ~ Boston Globe

"I loved it! It is smart, funny - even unexpectedly insightful and moving" ~ Scott Simon, National Public Radio

"A comical analysis of sports' childish side ... this parody of E S P N's SportsCenter is pitched directly and proudly at the juvenile in sports fans of all ages" ~ The New York Times