The Complete History of Comedy (Abridged) 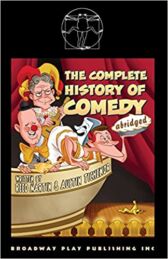 Another Masterpiece of Mirth!

The Complete History of America (Abridged)

The Bible - The Complete Word of God (Abridged)

All the Great Books (Abridged)

The Complete World of Sports - (Abridged)

THE COMPLETE HISTORY OF COMEDY (ABRIDGED)

From the high-brow to the low, The Complete History of Comedy (Abridged) covers comedy through the ages

From Aristophanes and Shakespeare and Molière to Vaudeville

And Charlie Chaplin to The Daily Show and Anthony Weiner

"You knew they'd get this one right. The Complete History of Comedy (Abridged) - is a madcap, breakneck-speed two hours. Audacious, often outrageous and bawdy, the frantic pacing of COMEDY reminds you of an old-time burlesque or vaudeville revue" ~ Boston Stages

"A wild, wild ride! It's funny. Really, really funny And most of all, it's really, really smart" ~ Cincinnati Enquirer

Not to be missed!