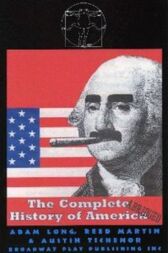 During the manic, ninety-minute program they mine dozens of landmark events and trends for comic gold ... not only do they know how to give American history an irreverent boost, they actually turn it into something accessible and alive" ~ Pamela Sommers, The Washington Post

"... interprets the past as a breathlessly paced sequence of silly vaudeville sketches, word-association games, puns and crude parodies of movie and television genres. Nothing is sacred, and many of the facts have been skewed to suggest the paranoid ravings of a particularly loony tabloid" ~ Stephen Holden, The New York Times

"History has never been this much fun. Or as delightfully mutilated. Doubtless, reputable historians would cringe at this slapstick telling of the American saga. But the rest of us can just giggle uncontrollably" ~ Bill Brownstein, The Gazette (Montreal)