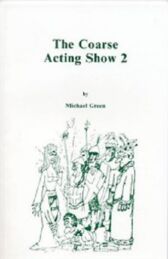 In each of these masterpieces sets collapse, actors fail to appear and props fall to pieces while the casts carry on, believing that the audience won't notice

The Cherry Sisters, a previously undiscovered Chekhov fragment, is a desperately sincere piece with a teary ending (spoiled by a faulty prop that necessitates a standing death)

To see the rest of the Coarse Acting series, click here