The Clean House and Other Plays 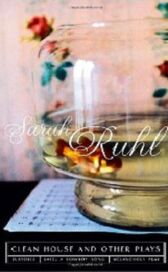 In the award-winning "Clean House" - a play of uncommon romance and uncommon comedy - a maid who hates cleaning dreams about creating the perfect joke, while a doctor who treats cancer leaves his heart inside one of his patients

This volume also includes Eurydice, Ruhl's reinvention of the tragic Greek tale of love and loss, together with a third play still to be named

"The Clean House is not, by any means, a traditional boy-meets-girl story. In fact disease, death, and dirt are among the subjects it addresses. This comedy is romantic, deeply so, but in the more arcane sense of the word: visionary, tinged with fantasy, extravagant in feeling, maybe a little nuts" ~ The New York Times

"Touching, inventive, invigoratingly compact, and luminously liquid, Eurydice reframes the ancient myth of ill-fated love to focus not on the bereaved musician but on his dead bride-and on her struggle with love beyond the grave" ~ San Francisco Chronicle