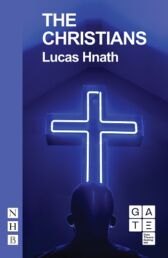 For the last twenty years, Pastor Paul has been building his church

Starting in a modest storefront, he now presides over a flock of thousands

Idolised by his followers, today should be a day for joy and celebration

As fractures spread throughout his congregation, Paul must fight to prevent his church from tearing itself apart

The Christians is a remarkable exploration of faith and community in the modern world, asking profound questions about what we believe and why

The play was given its US premiere by the Actors Theatre of Louisville, 2014 and had its UK premiere at the Traverse Theatre, Edinburgh as part of the 2015 Edinburgh Festival Fringe

" raises probing questions about how and why organized religion can be a divisive, if not abusive, social force consistently combines formal invention with intellectual inquiry. Mr. Hnath is quickly emerging as one of the brightest new voices of his generation" ~ NY Times

" powerful, riveting handles a complex and intellectual debate in a relatable way and that, more importantly, shows the human and real consequences of choices based in spirituality" ~ National Catholic Reporter

" plants the audience squarely in the thick of the battle utterly engrossing many attendees bowed their heads at each call for prayer before reminding themselves that this is, in fact, just a play" ~ BroadwayWorld.com