The Charitable Sisterhood of the Second Trinity Victory Church 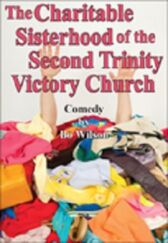 The roads are flooded, the bridges are washed out, and less generous souls are staying safely indoors, but it takes more than a little rain to keep the ladies of the Charitable Sisterhood from fulfilling their sworn mission

Bea Littleton is the pastor's wife

Lorraine Jensen is the tireless mother of nine

Tina Yates is the transplanted Yankee

And Janet Murchison is the newest arrival

When these ladies meet to organize a relief effort for homeless Guatamalans, they are greeted with a small mountain of community donations

But one woman's junk is another woman's treasure, and that pile of stuff in this little church basement is hiding a thing or two!

And - most of all - one another

An hilarious and heart-warming play

"The humorously unwieldy title might suggest another church lady play, but the charitable sisters are more like the women of Steel Magnolias, with a few unexpected twists." ~ Richmond Times-Dispatch