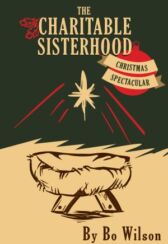 Christmas is only three weeks away, and the ladies of the Charitable Sisterhood are preparing for Second Trinity Church's annual Christmas Spectacular

Sisterhood leader Bea Littleton is certain that the culprit is her longtime rival, Lucille Orton, from First Salvation - a place of extremely strict beliefs just up the road

By show time, Janet is starting to think she knows exactly who is guilty of what

As a result, we watch from both onstage and backstage, as the sisterhood performs sacred songs and satirical skits

After all, where else would Santa meet the Wise Men other than the Manger?

"Wilson reunites the same beloved characters from the original The Charitable Sisterhood. With their trademark sense of humor and wit, the ladies put their good works behind the Christmas Spectacular to solve a Christmas Eve mystery"~ Broadway World

"As its larky show-within-a-show unspools, The Charitable Sisterhood Christmas Spectacular pays off with enough guffaws to earn its place in our yuletide theater canon" ~ Richmond Times-Dispatch