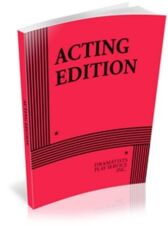 Large Mixed Cast
When the audience enters, the curtains are open and the stage empty

Slowly the cast enters, wondering what it's to perform

To warm up, they do pantomime scenes from their "great success," The Black Death

Then they discover three cards marked "Sea," "Cave," and "Future" They reject the sea (too cold) and the future (too far) and opt to create life in a dark cave, when early man was threatened both by marauding beasts and by his fear of the unknown

Hunters and a warrior journey forth in search of prey but return empty-handed, as even the animals have fled the hostile terrain Then the warrior discovers a "strange tribe" with the unheard of gift of laughter, and a "great winged thing" invades the sanctuary, causing panic

A decision must be made whether to leave or stay - and the vote is to venture forth, despite what might lie ahead

Everything's here from a touch of Pirandello to Story Theatre, and the play requires nothing in the way of "production" except imagination

"Kelly's work lends a bright note uniquely its own to the [L.A.] theatre scene" ~ LA Herald-Examiner