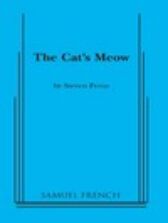 Based on the true story of a mysterious Hollywood death, The Cat's Meow offers a fascinating cross section of Jazz Era characters who intersect for one notorious weekend on board William Randolph Hearst's yacht in 1924

The play was adapted for film in 2002, with a screenplay by the author, directed by Peter Bogdanovich, and starring Kirsten Dunst, Eddie Izzard, and Edward Herrmann

Weekend guests include: Charlie Chaplin, who has been carrying on with movie star Marion Davies, a secret known to Davies' paramour, the married and much older -- Hearst; and movie mogul Thomas Ince, who is hoping to revive his flagging fortunes by forming a partnership with Hearst. Playing with fire, Ince tries to convince Hearst that he can handle both Marion's movie career and her private life as well

During its 1997 Los Angeles premiere, audiences and critics were both entertained and moved by this darkly comic morality play, laced with clandestine romance, Hollywood excess, and steadily heating tensions, which erupt in a shocking act of violence

"Recommended Hands Down! Will have you on the edge of your seat" ~ CBS Radio

MARGARET LIVINGSTON - 20s, an actress and mistress to Ince

MARION DAVIES - 27 (but passing for 23), a movie star and Hearst's public mistress

MRS. INCE (VOICE ON PHONE) - 40s, Ince's recently awoken wife, who remained at home. (NOTE: For "Mrs. Ince", some productions have had an actress appear on stage, with a phone in her hand. If this method is utilized, doubling is possible with "Mrs. Goodman")