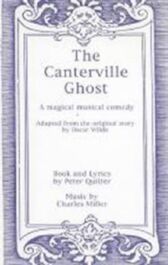 When a brash American millionaire family stay at the gothic English stately home Canterville Chase, they fail to be the least bit frightened by Sir Simon, the resident ghost

Condemned by a curse to haunt the house forever, Sir Simon tries every spooky trick in the book, but his antics only provide amusement

But young Virginia, appalled by her family's behaviour, seeks out the depressed ghost and befriends him. But can she help him lift the curse ... ?

"There's an unspeakable, heartrending truth at the core of this piece that makes it as beautiful as it is funny" ~ Chronicle