The Canterbury Tales - Love and Marriage 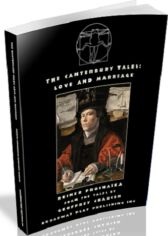 Faithful to the original but translated into Modern English, this adaptation is especially accessible to a young twenty-first-century audience

This adaptation of Chaucer's Canterbury Tales explores the bawdy humor of "The Miller's Tale," "The Merchant's Tale," "The Nun's Priest's Tale," and "The Wife of Bath's Prologue"

An excellent introduction to Chaucer's wise and gentle satire on love, marriage, and sex

"Canterbury Tales is not centered on sex but [it] does not shy from the pilgrims' raunchiness, and it was taken directly from Chaucer's original stories of an odd-lot of women and men headed for England's famous cathedral

Adapter Reiner Prochaska has pulled off a marvelous script, translated into modern English

He begins with Geoffrey Chaucer's strange language that was spoken in his time, long before the age of Shakespeare, when England still paid homage to Rome and the Pope

No religious overtones, let me reassure readers, creep into the tales of fellow travelers who are much more concerned with life's harrows and 'country matters' than God's or the Vatican's doings

In that era, they could not count on sticking around a long time and that made every day precious

And that's what Chaucer captured and playwright Prochaska affirms" ~ Roy Meachum, The Tentacle

FOR MORE ADAPTATIONS OF THE CANTERBURY TALES
click here