The Cambridge Companion to Tennessee Williams 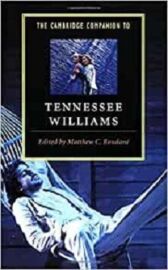 In this wide-ranging volume, the contributors cover a healthy sampling of Williams' works, from the early apprenticeship years in the 1930s through to his last play before his death in 1983, Something Cloudy, Something Clear

In addition to essays on such major plays as The Glass Menagerie, A Streetcar Named Desire, and Cat on a Hot Tin Roof, among others, the contributors also consider selected minor plays, short stories, poems, and biographical concerns