The Bully Plays - A Collection of 24 Ten Minute Plays 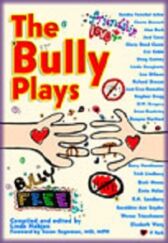 Large Mixed Cast
"This collection of plays is funny, sad, powerful and important. Bullying is a catch-phrase for treating others as less than human. All of these plays help teenagers develop their moral imaginations and see that there is no us/them. There is only us. The Bully Plays is a tasty antidote to our toxic teen culture" ~ Mary Pipher, Ph.D

This must-have, great value Anthology was commissioned in response to the growing epidemic of bullying and the all-too-often tragic results

The plays are touching, imaginative, powerful, uplifting and funny

... a teenager poignantly relates to his dad how a bullied classmate resorted to physical violence

... three dinosaurs at a museum surprise three bickering kids on a school outing

... a bully is forced to confront his victim "on the other side"

... a boy confronts a beast in ancient Greece who provides him with a different perspective on who's really the beast

... a girl on an anti-bullying crusade must face her own bullying

... high-school kids discuss the heartbreak of realizing they contributed to a classmate's death by remaining bystanders

... a mother and brother try to come to terms with the suicide of their "technicolor" son and brother

The trickle-down effect of bullying is explored in several plays, along with the dangers of cyber-bullying

The Collection even includes a mimed piece and a play in rhymed verse!

These playlets will challenge, inspire and enlighten your audiences and help you confront the issue of bullying in a constructive and creative way

The 24 Ten-minute Plays in the Collection are ...

Alex (a conversation about nothing) ~ José Casas - M1

Happy Birthday, Heather Higby (I Am Plotting Your Doom) ~ Stephen Gregg - F4 + 8 Either

Nobody Nose (The Trouble I've Seen) ~ Barry Kornhauser - 3 Either