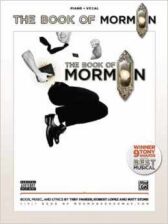 * Hello!
* Two by Two
* You and Me (But Mostly Me)
* Hasa Diga Eebowai
* Turn It Off
* I Am Here for You
* All-American Prophet
* Sal Tlay Ka Siti
* Man Up
* Making Things Up Again
* Spooky Mormon Hell Dream
* I Believe
* Baptize Me
* I Am Africa
* Joseph Smith American Moses
* Tomorrow Is a Latter Day

FOR A CD OF VOCAL & BACKING TRACKS
click here