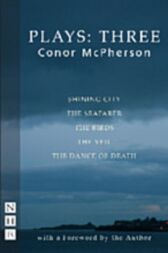 The five plays in this Collection are ...

Then a terrifying film

From Tippi Hedren, star of the Hitchcock film ...

" ... a powerful piece of theatre and a reminder to me of just how important that story has become truly frightening"

As in Hitchcock's famous film, masses of birds have begun to violently attack humans at high tide ...

... driving strangers Nat and Diane to take refuge in an abandoned farmhouse by the sea

But with no electricity and food scarce, the tension is palpable and hope is waning

And if two's company, three's certainly a crowd

As the sudden arrival of the mysterious Julia soon proves

"McPherson keeps us on the edge of our seat" ~ Irish Times

"These three flawed individuals react to a world where there are suddenly no rules. We all wonder what moral and ethical choices we might make under extreme stress. As it becomes clear that they may be among the very few still alive, the core of McPherson's adaptation takes over. Rather than detailing horrific attacks ... he provides the audience with a scenario that is both mysterious and shocking" ~ Quotidian Theatre Company

A man seeks help from a counsellor, claiming to have seen the ghost of his dead wife

The play, premiered at the Royal Court, London, is 'up there with The Weir, moving, compassionate, ingenious and absolutely gripping' ~ Daily Telegraph

It tells the story of an extended Christmas Eve card game, but one played for the highest stakes possible

Set in 'the big house' in 1820s rural Ireland, The Veil is McPherson's first period play

But when Reverend Berkeley arrives, determined to orchestrate a séance, chaos is unleased

'A cracking fireside tale of haunting and decay' ~ The Times

THE DANCE OF DEATH

A new version of Strindberg's classic, which premiered at the Trafalgar Studios in London