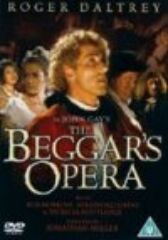 An adaptation of John Gay's 18th Century ballad opera, as performed for BBC television with The Who frontman Roger Daltrey taking the lead

The music for the production was arranged from 18th century folksongs by baroque music specialists Jeremy Barlow and John Eliot Gardiner, who conducts the English Baroque soloists, performing on period instruments