The American Dreams - The Reflecting Skin & The Passion of Darkly Noon 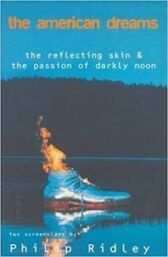 Set in the Idaho farmlands of the 1950s, the film follows eight-year-old Seth through a mythical summer where reality is heightened to the level of an hallucinogenic, quasi-fantasy

The second screenplay in the Collection is The Passion of Darkly Noon, a modern fable echoing the surrealist style of Ridley's dazzling and innovative debut film

It portrays a young man roaming the American countryside, the victim of a savage attack on his religious cult

For whom he develops a dangerous obsession ...

"Provocative, shocking and disturbing, a true original ... a masterpiece" - What's On

"Philip Ridley is a singular writer, a prolific polymath, probably a genius, and the creator of some of the most peculiar, grotesque and compelling British plays (and films) of the last several years" ~ Time Out