That Pretty Pretty or The Rape Play 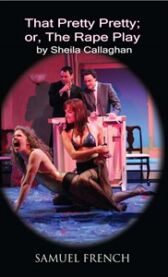 A pair of radical feminist ex-strippers scour the country on a murderous rampage against right-wing pro-lifers, blogging about their exploits in gruesome detail

Meanwhile, a scruffy screenwriter named Owen tries to bang out his magnum opus in a hotel room as his best friend Rodney ("The Rod") holds forth on rape and other "manly enterprises"

When Owen decides to incorporate the strippers into his screenplay, the boundaries of reality begin to blur

And only a visit from Jane Fonda can help keep worlds from blowing apart ...

"A submersion in the anarchy of ambivalence: variously a rant, a riff, a rumble - about our notions of naturalism, objectification, perversity, and beauty ... There's sass and sarcasm in Callaghan's high-energy punk writing" ~ John Lahr, The New Yorker

"Raunchy, savvy ... the twisted, caffeinated world of the show imagines the collective subconscious of a culture where girls never stop going wild ... [Callaghan] pushes her audience's buttons with an aggressive treatment of some of the darker corners of the human psyche" ~ The New York Times