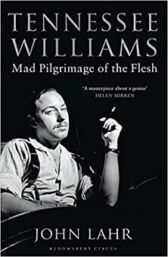 On 31 March 1945, at The Playhouse Theatre on Forty-Eight Street the curtain rose on the opening night of The Glass Menagerie

Tennessee Williams, the show's thirty-four-year-old playwright, sat hunched in an aisle seat looking, according to one paper, 'like a farm boy in his Sunday best'

The Broadway premiere, which had been heading for disaster, closed to an astonishing twenty-four curtain calls and became an instant sell-out

Tracing Williams' turbulent moral and psychological shifts, acclaimed theatre critic John Lahr sheds new light on the man and his work, as well as the America his plays helped to define

Williams created characters so large that they have become part of American folklore - Blanche, Stanley, Big Daddy, Brick, Amanda and Laura transcend their stories, haunting us with their fierce, flawed lives

Similarly, Williams himself swung high and low in his single-minded pursuit of greatness

Lahr shows how Williams' late-blooming homosexual rebellion, his struggle against madness, his grief-struck relationships with his combustible father, prim and pious mother and 'mad' sister Rose, victim to one of the first lobotomies in America, became central themes in his drama

Including Williams' poems, stories, journals and private correspondence in his discussion of the work -posthumously Williams has been regarded as one of the best letter writers of his day - Lahr delivers an astoundingly sensitive and lively reassessment of one of America's greatest dramatists

Tennessee Williams - Mad Pilgrimage of the Flesh is the long-awaited, definitive life and a masterpiece of the biographer's art

Used copy in excellent condition, inscribed by the author