Tennessee Williams - Everyone Else Is An Audience 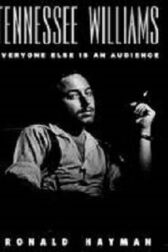 Few playwrights write as much of their lives into every work as did Tennessee Williams, and few had lives that were so obviously theatrical

Growing up amid abusive alcoholism, genteel posturing, and the incipient madness of his beloved sister, Rose, Williams produced plays in which violence exploded into rape, castration, and even cannibalism, projecting dramatic personal traumas

In this frank, compelling study, the distinguished biographer and critic Ronald Hayman explores the intersection of biography and art in one of the most exuberantly autobiographical dramatists of the American theater

By the time he died, in 1983, Williams’ reputation had seriously declined

More than twenty years of drug and alcohol addiction, coupled with devastating openness about his promiscuous homosexuality, had all but destroyed one of America’s greatest playwrights, and Williams’ new works were increasingly unsuccessful

In recent years, however, Broadway revivals and amateur productions have testified to his enduring greatness as one of the shapers of the American theater

The major plays such as The Glass Menagerie, Cat on a Hot Tin Roof and A Streetcar Named Desire, never disappeared from American theatrical consciousness

Their heroes - Tom Wingfield, Brick Pollitt, even Blanche Du Bois - are portraits of the artist as a very troubled man

More than any previous biographer, he unmasks the compulsive, driven man behind the characters and lays bare the pain that engendered Williams’ violent apocalypses