Tennessee Williams - A Portrait in Laughter and Lamentation 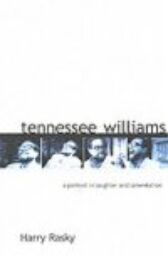 When Harry Rasky, one of the most prolific and innovative documentary filmmakers, persuaded Tennessee Williams to become a subject of a film, Rasky stated in the opening narrative, "In a sense this is a memory play about Tennessee Williams. What he once called the past, the present and the perhaps"

This is the story of how he went about doing just that, replete with all the laughter and lamentations that were experienced by them both in the process. This is a story of the making of a friendship and a film