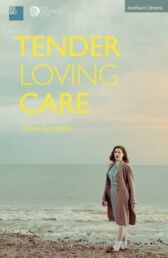 "My brother's trying to win the war. He's fighting. We should be fighting. I'm brilliant at fighting"

A girl named Poppy stands on the precipice of history

Tomorrow is the biggest day of her life: D-Day

Along with her friend Evie, Poppy finds herself volunteering in a Southsea hospital, preparing for the arrival of casualties of the D-Day landings

Poppy has always wanted to be a war hero, but instead finds herself being asked to do the unthinkable provide a German prisoner of war with compassionate and tender care

Character Age: 18yrs
· A trainee nurse
· Born and raised in Portsmouth into a working class family
· Best friends with Evie, who she went to school with
· A boisterous, bossy, headstrong young lady. Full of energy and fun. Strong aversion to authority

Character Age: 18yrs
· A trainee nurse
· Born and raised in Portsmouth into a working class family
· A nervous and bumbling type of girl. Often clumsy and frequently getting things wrong

Character Age: 40s
· Born and raised in Portsmouth into an educated middle class family
· Bossy. A disciplinarian who insists everything is done her way
· Lost her fiancée at the start of the war and has never got over it

· German. Born and raised in a small village in the North of Germany
· Does not speak English
· A strong, athletic young man who worked on the family farm from a young age

He ploughed the land until he eventually had to report for military service right at the end of the war. Captured by the allies in the D-Day landings and brought over to Portsmouth as a Prisoner of War