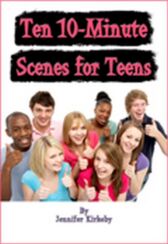 Characters laugh, cry, fume, love, hate, plead and question life and death, good and bad in this collection of plays woven with humor and heart ...

Prom Royalty (M2,F2) - What begins as a wonderful parade ride for high-school royalty dissolves into a hilarious disaster

The Elevator (M3,F4) - A girl tries to overcome her fear of elevators by riding one for the first time in public

Time Warp (M2,F2) - A present-day teenage boy and a fairy tale princess discover that their lives have magically intersected

Danny (F3) - Three sisters visit their brother, Danny's, gravesite on the one-year anniversary of his death

Late (F2) - Alison meets with her longtime girlfriend, Ryan, at a park and eventually shares the fact that she might be pregnant

Principal - (M2,F3 + 2 either) - Two parents have been summoned to bring their kids to the principal's office without knowing why

NOTE: Flexible staging - runs about 2 hours - may be performed individually or in any combination as an evening of short plays