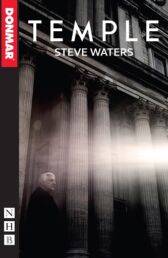 "Was it ever our choice to be the parish church of high finance?"

On 21 October 2011 a building that had kept open through floods, the Blitz and terrorist threats closes its doors

On 28 October the City of London initiates legal action against Occupy to begin removing them from outside the Cathedral ...

Temple is a dramatic fictional account of these events

It received its world premiere at the Donmar Warehouse Theatre, London in May 2015 and starred Simon Russell Beale as the Dean of St Paul's

"Asks big questions about the role of the church in the modern world ... Waters' virtue is that he allows the audience the freedom to decide where it stands ... the play leaves you debating the issues it so cogently raises" ~ Guardian

"A triumph ... [Goes] behind the head-lines, and closed ecclesiastical doors, to produce a riveting drama that unpicks the institutional and psychological turmoil the [Occupy London] saga caused" ~ Daily Telegraph

"Waters takes real figures and real events and transforms them into a fictional account that plays like High Noon ... 90 minutes of barbed politesse that never lets up ... rich and ambiguous and funny and fundamental ... quietly stunning ... a marvellous show" ~ The Times