Tales from The Red Rose Inn and Other Plays 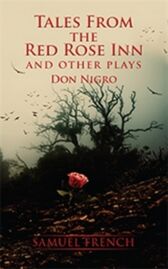 In Ohio during the Revolution, a dangerous looking stranger wins Susannah Rose and the Red Rose Inn in a game of chance. Susannah rages as he tries to gain her acceptance. She is in love with a man she never met, a man who years ago carved his name on the old tree behind the inn. The confrontation escalates when her adversary calmly admits that he murdered that man and buried him the garden of a Boston brothel

Lucy, sixteen and lost, is a fey occult investigatrix hungry for adventure. Amidst cooing doves, she tells of her alter ego, Imogen, who lives in a haunted house with her brother and his pet barnacle. He is plotting to murder the cousin who has inherited the mansion. The language is rich, strange and hypnotic as Lucy goes so deeply into her tales that she may not emerge sane while someone creeps through the moonlight with a rusty barnacle knife. This eccentric comedy is like a Gorey drawing come to life

Lucy, sixteen and lost, is a fey occult investigatrix hungry for adventure. Amidst cooing doves, she tells of her alter ego, Imogen, who lives in a haunted house with her brother and his pet barnacle. He is plotting to murder the cousin who has inherited the mansion. The language is rich, strange and hypnotic as Lucy goes so deeply into her tales that she may not emerge sane while someone creeps through the moonlight with a rusty barnacle knife. This eccentric comedy is like a Gorey drawing come to life

Desdemona, a lonely actress cast as a fairy in A Midsummer Night's Dream, invites a man she hasn't seen in seven years to a performance. Surprised and a little frightened when he actually shows up, she suggests that they go for coffee. She takes her car; he follows in his. As she leads him on an eerie journey through a labyrinth of dark country roads, she grows more and more afraid of what will happen when they stop. This unusual monologue about loneliness, fear and enchantment is a fine showcase for a young actress

Joan of Arc in the Autumn - F1

A bench in a garden. Following her trial, it as rumored that Joan of Arc was not actually executed and, in 1436, her brothers announced that she was alive. Three years later they came to Orleans with a woman they insisted was Joan. In this monologue, that young woman speaks about her confused memories of her life and martyrdom, which now seems like a dream in which there is much whispering and everything is burning. She speaks of her voices, sorrows and visions, and pulls us into her possibly imaginary world. Perhaps she is a mad girl found in a brothel - perhaps not

John Warburton was an English antiquary who possessed many rare Elizabethan and Jacobean scripts, including the only extant copies of several plays said to have been written by Shakespeare. These manuscripts were lost forever when his illiterate but devoted cook, Betsy Baker, burned some and used the rest to line pie bottoms. This funny and powerful ten minute play takes place at the moment Warburton discovers what happened to his manuscripts

Circle of light in darkness. Andromeda awakens from a dream about ravens and runs to Higgs Field, a place she's been forbidden to enter, in search of a cat. Mr. Gott and the Quark family live in this strange, haunted place with a great black hole in the center. In this funny and oddly compelling monologue, surreal metaphors of modern physics spring to life as a Gothic nightmare

Things that Go Bump in the Night - M1,F1

Ben wanders out of his bedroom to find Tracy sitting in the dark, troubled. During the play they saw earlier, stage hands in black rearranged the furniture between scenes. Tracy fears that someone might rearrange their furniture while they sleep. What she is really afraid of is the ultimate subject of this funny and compelling play about love, reality and fear featuring the characters from Seascape with Sharks and Dancer

A scream and barking interrupt Uncle Clete as he has his morning coffee with his parakeet Wendell Willkie. His wife has just discovered an enormous toad on the bathroom scale. He puts it out in the yard, but next morning there it is again. He can't get rid of it, and finally marks it with lipstick to be sure it's the same toad. At last, he puts it in a bucket and takes it to the county line, but he is foiled by the sheriff who wants to know why he has a toad wearing lipstick in a bucket. A funny vaudevillian mediation on the nature of reality and toads

In this true story of abuse and murder from the pages of the notorious eighteenth century compendium of crime, The Newgate Calendar, three serving girls to sadistic Mrs. Brownrigg and her son are beaten and tortured by their employers. One escapes and summons help, but help is not easy to come by in their world. The eerie tale is told from the point of view of the girls and the son. One died, one lived and one was lost. Which was which?

Al Capone, his brain ravaged by syphilis, wanders in his retirement home in Florida, talking to himself, revisiting conversations he had years ago, trying to make sense of his life. The girls, the murders, glories and horrors of his mobster past mix with memories of his childhood and his time in prison, his hatred and his growing dementia. Here is a rich, funny, horrifying and moving outsider's view of American in the first half of the twentieth century