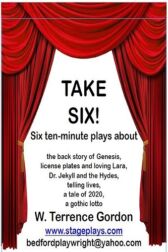 The Six Ten-Minute Plays in the Collection are ..

In Back Story, the solid man is saved by his unsullied woman (sorry, James Joyce), but nothing can save the serpent from getting knocked out in the first round. Here is the manuscript that the editors of Genesis failed to find

A license plate sparks infatuation that goes from 0 to 100 faster than the Jaguar that carries it, and that is fast enough to guarantee a crash

DR. JEKYLL AND THE HYDES

The good doctor and his evil twin were destined to have a stormy relationship, but when Mrs. Hyde shows up asking the doctor for help with her husband's darkening moods, love raises the stakes for all three of them

Dead men tell no lies, but family and acquaintances gathered for funeral home visitation can mask and unmask the truth, revealing more about themselves than they reveal in their reminiscences about the newly departed

Rogue cable service, fake news, mistaken identity, swarming government drones are all part of the upheavals reaching Nova Scotia on the day following the U.S. presidential election of 2020, but nothing trumps Cape Breton. (Sequel to appear in early 2020)

SCRATCH THE WINNER: A GOTHIC TALE OF LOTTOROBOTIC COMPULSION