TAKE EIGHT! - 8 ONE-ACT Plays including A Christie for Christmas 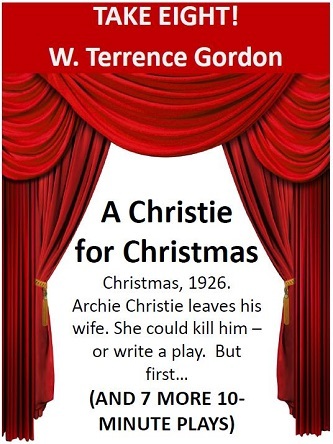 Agatha Christie, traumatized by marital infidelity, seeks help from Sigmund Freud. His brilliant analysis is not only helpful but provides her with ideas for a new play. When Christie reveals that she quickly repaid infidelity in kind, she turns the discussion to female orgasm and the Kama Sutra, and Freud is shaken out of his sophistication and professional detachment

(Historical note: the manuscript of Christie's The Lie was locked away in 1927 and not discovered till 2015. A costumed reading was performed at the Annual International Agatha Christie Festival in September 2018.)

An autistic boy, unable to speak, is trapped as much by his robotic family and a loquacious mother, apparently incapable of showing him love, as by his own condition. He bonds with his uncle, an outsider in the family, and the two of them say all that needs to be said in the timeless language of dance

Four characters do not allow the countless relationships of their past lives to stop them from forming new ones with each other. It's a story of failed deception, self-deception, honest inquiry, with some lessons learned but more bridges burned

Williams, who has agreed to look at some of Terry's scripts, arrives for their meeting with a terrible thirst. Things do not go well at first and then much worse. There is drinking. When Williams blacks out, Terry reads aloud passages that now seem to him to call the legendary playwright's reputation into question. When Williams comes to, he does not realize that he is listening to a reading of his own words and is mightily impressed. He offers some advice before his hasty departure, leaving Terry with an endorsement, but not quite the one he had hoped for

A man with a "theory" closer to poetry than to physics believes he has discovered that the universe is not expanding. One after another, frenzied people disregard him, discount him without hearing him out, or twist the announcement of his discovery to their own preoccupations. Then a thoughtful young woman gives him her full attention, sharing her observations on disconnected humanity. Their conversation opens a meditation on the link between a life planned by light and lessons from the shadows of time

Before Marshall McLuhan became a media guru on the world stage, he was a professor of English literature. Part microscope and part kaleidoscope, this play takes McLuhan from Cambridge University in 1934 to Madison, Wisconsin in 1936 and then puts him outside time in the company of philosophers (Heraclitus), artists (Picasso, Joyce) and innovators from Sigmund Freud to Henry Ford