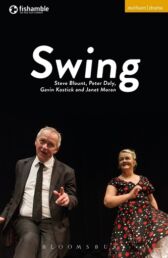 May has come to dance

Her boyfriend is away and she needs the company

Joe's been doing this a while

Recently divorced, he's taking May through the steps

As they swing around the dance floor they meet a plethora of characters ...

These include their passive aggressive dance instructors

The older man, George and Sally whom he has the eye for

And Imelda who's only recently moved to the city

And Noelia from Spain

And Regina from Northern Ireland

And Seán from the country who struggles to count the steps

An international hit from New York, Paris and Edinburgh, Swing is a two-hander comedy about dancing and music and love

And thinking outside the box and seeing things clearly

And living as well as you can

With rock and roll music, it's sure to make you want to dance

And the Reviews could hardly be better ...

★★★★★ "Funny, warm, and well produced, with a rousing finale that's enough to make you kick up your own heels" ~ Irish Theatre Magazine

★★★★ "There's a real sweetness to this comedy. Give it a whirl" ~ Sunday Times