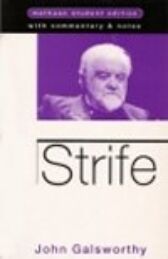 Strife charts the progress of an industrial strike, seen from both the workers' and directors' points of view as well as the directors and looks at the relationship between wives across the class divide as they attempt to persuade their obdurate husbands to broker a deal

John Galsworthy (1867-1933), novelist and dramatist, is most widely known as the author of The Forsyte Saga, but recent productions testify to the power that his plays still exert over modern audiences and the strength and relevance of the issues he raised