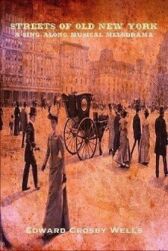 Cheer the good guys and hiss the villains!

And his partner in crime, Badger

Together they cook the books and rob the innocent

Bloodgood's daughter, Alida, is no angel either as she plots to marry into Society, even at the cost of a couple of broken hearts

Murder, suicide, intrigue and treachery of every kind abound in this comedy of manners and morals

Freely adapted from the 1857 drama The Poor of New York by Dion Boucicault which was in turn an adaptation of Eugène Nus and Édouard Brisebarre's Les Pauvres de Paris (Paris, 1856)

" ... an enjoyable evening of theatre which embraces patriotism and the fight for values our country used to uphold ... an event for the whole family ... Refreshing! Engaging! And downright fun!" ~ G. S. Bowen - Hi! Drama Review