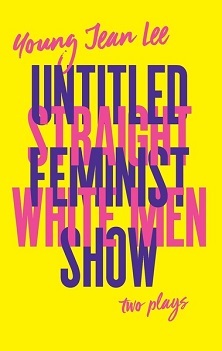 Two plays by the award-winning dramatist, the first Asian-American female playwright to be produced on Broadway ...

It’s Christmas Eve, and Ed has gathered his three adult sons to celebrate with matching pajamas, trash-talking, and Chinese takeout

But when a question they can’t answer interrupts their holiday cheer, they are forced to confront their own identities

"Gripping ... A play of ideas, and very timely ideas at that" ~ New York

"A thought-provoking piece that fires in many directions at once" ~ Elisabeth Vincentelli, New York Post

"The twisty, turbulent, argumentative work of Young Jean Lee … will make you flinch, but it’s hard to look away… Lee has always been interested in exposing how we perform our identities. But in Straight White Men, she drills into something more core. Shuck off, subvert, cleave to your gender or race all you like, but a universal horror of weakness remains – a collective orientation toward status, power, control' ~ New York Times

Six charismatic stars of the downtown theatre, dance, cabaret, and burlesque worlds come together to invite the audience on an exhilaratingly irreverent, nearly-wordless celebration of a fluid and limitless sense of identity.

'Young Jean Lee is, hands down, the most adventurous downtown playwright of her generation' ~ New York Times

"In a scant (and scantily clad) hour, Lee and her gutsy danc­ers try on a dizzying variety of modes and masks to shake up gender norms" ~ David Cote, Time Out New York