State and Main - A Screenplay 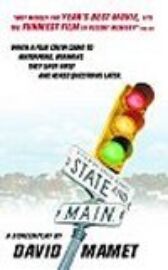 Part screwball comedy, part showbiz satire, State and Main is the story of a big-budget film production that wreaks moral havoc in a quaint New England town, sowing a bumper crop of corruption, vanity and greed

Everything seems perfect when film director hits on sleeply little Waterford, Vermont as the location for his new movie The Old Mill. It looks 19th century, and it's cheap; the locals are eager to meet and mingle with the Hollywood glitterati, and it even has an old mill. At least, that's what it says in the brochure

Unfortunately, the brochure is wrong; Waterford's old mill was destroyed during a rash of suspicious fires back in 1960. Excising the old mill of his story's title is just one of the script changes now demanded of writer Joe White (Philip Seymour Hoffman), a promising young playwright making his first foray into film. Before he can get to work, however, Joe must find a replacement for his treasured manual typewriter, lost en route from New Hampshire

But it's not until the film's stars Bob Barrenger (Alec Baldwin) and Claire Wellesley (Sarah Jessica Parker) arrive that production kicks into gear and the real problems begin...

"State and Main is the year's best and smartest comedy... pricelessly funny... you'll laugh till it hurts" ~ Rolling Stone