Stanislavsky in the World - The System and its Transformations Across Continents 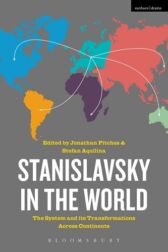 Case studies written by local experts, historians and practitioners are brought together to introduce the reader to new routes of Stanislavskian transmission across the continents of Europe, Asia, Africa, Australasia and South (Latin) America

Such a diverse set of stories moves radically beyond linear understandings of transmission to embrace questions of transformation, translation, hybridisation, appropriation and resistance

This important work not only makes a significant contribution to Stanislavsky studies but also to recent research on theatre and interculturalism, theatre and globalisation, theatre and (post)colonialism and to the wider critical turn in performer training historiographies

'A System for all Nations? Stanislavsky in the World' by Jonathan Pitches

'Three Periods of Stanislavsky in Italy' by Franco Ruffini

'Between Nationalism and Ideology: Stanislavsky in Lithuania' by Ina Pukelyte

'An Amateur Processing of the System: Stanislavsky in Malta' by Stefan Aquilina

'Moments of Transition: Stanislavsky in Greece' by Maria Gaitanidi

'Towards a Chinese School of Performance and Directing: Jiao Juyin' by Siyuan Liu

'Stanislavsky with Chinese Characteristics: How the System was introduced into China' by Jonathan Pitches and Ruru Li

'A Producer's Perspective: Stanislavsky in Contemporary Japan' by Kaori Nakayama

'Stanislavsky in Brazil: Territories and Frontiers' by Arlete Cavaliere

'Stanislavsky in Nigeria: Convergences and Counterpoints in Actor Training and Practice' by Kene Igweonu

'Stanislavsky in Tunisian Theatre: a Heritage in Progress' by Moez Mrabet

'A Director's Perspective: Stanislavsky in South Africa' by David Peimer

'Theatrical Bowerbirds: Received Stanislavsky and the Tyranny of Distance in Australian Actor Training' by Ian Maxwell

'Stanislavsky in Aotearoa: The System Experienced through the Maori World' by Hilary Halba

'Between Stanislavsky and Bharata: Actor training at the National School of Drama in New Delhi' by Jooyeoul Ryu

'Stanislavsky in the Modern Theatre of Bangladesh: A Mapping of Postcolonial Appropriation and Assimilation' by Syed Jamil Ahmed