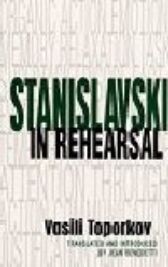 Vasili Toporkov was one of the rare outsiders ever to be invited to join the Moscow Art Theatre. Although already an experienced and accomplished artist, he was forced to retrain as an actor under Stanislavski's rigorous guidance

Stanislavski in Rehearsal is Toporkov's vivid account of this learning process, offering an eloquent and jargon-free insight into Stanislavski's legendary 'system' and his method of rehearsal that became known as the Method of Physical Action

Through Toporkov's account, Stanislavski is revealed as a multi-faceted personality - funny, furious, kind, ruthless, encouraging, exacting - waging a war against clichés and quick answers, inspiring his actors and driving them to despair in his pursuit of artistic perfection