Stairs to the Roof 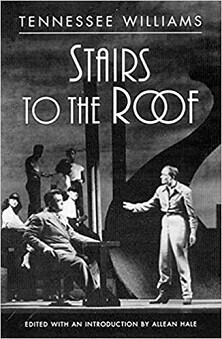 Stairs to the Roof is a rare and different Williams' work - a love story, a comedy, an experiment in meta-theater, with a touch of early science fiction

Stairs is Williams' revenge, expressed through his alter ego, Benjamin Murphy, the clerk who stages a one-man rebellion against the clock, the monotony of his eight-to-five job, and all the dehumanizing forces of an increasingly mechanized and commercial society

With the world at war and civilization in danger of collapse, Williams dared to imagine a utopian future as Ben leads us up his stairs towards the Millennium

Stairs to the Roof was produced only twice, once at the Playbox in Pasadena, California, in 1945, and subsequently at the Pasadena Playhouse in 1947