Staging Shakespeare - A Director's Guide to Preparing a Production 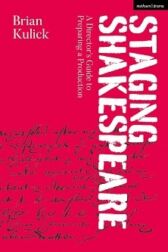 This book begins with a phone call

You answer it and learn that you got the job

Several months from now you're going to stage a Shakespeare play

What do you do?

What do you do after that initial burst of adrenalin has passed through your body and you realize you haven't a clue as to what the play is really about, or what you might want to do with it?

How exactly do you prepare for such an equally wonderful and daunting task?

This is the central question addressed by this book

It will save you some of the panic, wasted time, and fruitless paths experienced

It guides you through the crucial period of preparation and helps focus on such issues as:

· What Shakespeare's life, work, and world can tell us
· What patterns to look for in the text
· What techniques might help unpack Shakespeare's verse
· What approaches might unlock certain hidden meanings
· What literary lenses might bring things into sharper focus
· What secondary sources might lead to a broader contextual understanding
· What thought experiments might aid in visualizing the play

Ultimately, this book draws back the curtain and shows how the antique machinery of Shakespeare's theatre works

Introduction: “For It Hath No Bottom” Shakespeare and the Vertigo of Multiple Meaning

PART ONE: “It Shall be Inventoried” A Brief Look at Shakespeare's Dramatic World

PART TWO “What Means This, My Lord?” A Fourfold Approach to Interpretation

PART THREE “Come, Give Us A Taste of your Quality.” Practical Matters

Chapter Ten: “What Say You?” Finding the Rhyme between Shakespeare, Yourself, and Your Time
Chapter Eleven: “The Fall of a Sparrow.” Shaping Shakespeare
Chapter Twelve. “Brave New Worlds.” Designing Shakespeare
Chapter Thirteen: “The World Must be Peopled.” Auditions
Chapter Fourteen: “Resolve You For More Amazement.” The First Day of Rehearsal
Chapter Fifteen: “For Here I Hope Begins Our Lasting Joy.” A Word About Shakespeare's Endings

Brian Kulick is the Chair of Columbia University’s School of the Arts Theatre Program, where he also teaches directing with Anne Bogart. In addition to staging the works of Shakespeare, Brecht, and Tony Kushner, he has been the Artistic Director of Classic Stage Company and an ArtisticAssociate for The Public Theatre