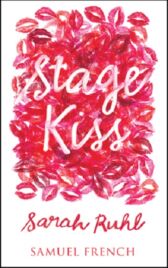 THIS IS THE ACTING EDITION

When two actors with a history are thrown together as romantic leads in a forgotten 1930s melodrama, they quickly lose touch with reality as the story onstage follows them offstage

SHE - A woman in her mid-forties. Plays the role of Ada Wilcox

HE - A man in his mid-forties. Plays the role of Johnny Lowell

KEVIN - the Reader, also plays the Understudy and the Doctor and the Butler

AN ACTRESS - in her late twenties or early thirties, plays MILLICENT in Act 1 and LAURIE in Act 2

"CRITIC'S PICK. Suffused with warmth and humor. Sarah Ruhl frothily whips together romantic comedy and backstage farce in this lively comedy about a pair of actors...who find life and art mixing together when they rekindle an old romance during rehearsals for a play" ~ New York Times

"FOUR STARS. Sarah Ruhl delivers a brilliant comedy that aims for big laughs and hits its target. Funny: There's nothing like it" ~ New York Post

"At once a knowing sendup of the hazy half-truths of stage naturalism and a goofy meditation on the nature of desire and sexual fantasy, [Stage Kiss] manages to be both wholly original and instantly recognizable to the audience. As a satire of theatre and theatricals, it's right up there with Neil Simon's 'The Sunshine Boys'' ~ The New Yorker