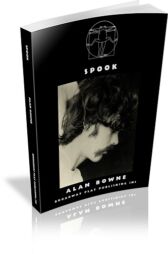 Only thing is, the place is haunted by the handsome young ghost of a swashbuckling 19th Century smuggler who was hanged for his crimes

The local minister, Mr Butts, finds it all gloriously romantic

Eleanor, a worldly woman, is skeptical of the ghost's existence

But spinsterish Lolly claims he visits her at night ...

And if she hasn't - how could the ghost possibly prefer Lolly to her?

As the ghost continues his visitations, his reasons for the haunting are gradually revealed