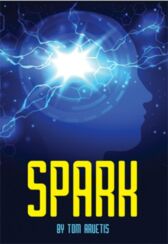 Large Mixed Cast
Inspired by the Greek myths of Prometheus and Pandora, Spark ponders a world without fire and suggests that no matter how hard we try to trap our worst fears in a box, it is impossible to stand in the way of young imaginations driven by curiosity and hope

Her friends Jude and Farren are counting on her to up her game - no more distractions, no more mistakes

A Game that will ultimately determine their rank in the community

Life in Sanctuary is too precarious not to be taken seriously, but Pan's uncertainty and innate curiosity send them on a different course altogether

After encountering two young strangers, Pan begins to question all she knows

Is Sanctuary the safe haven she has always believed it to be?

Or is it a prison built on fear? ,

"Spark feels most concerned with the danger of living in a state of fear, as well as the universal, heroic quest for truth and triumph of hope" ~ Time Out Chicago