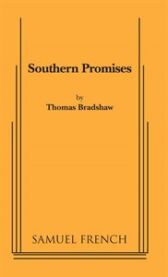 When the master of the plantation dies, he wills his slaves to be freed, but his wife doesn't think that good property should be squandered

The play is inspired by the true story of Henry Box Brown who escaped to the north by mailing himself in a box. Southern Promises provides a unique portrait of the old south

"Slowly, almost single-handedly, a twenty-eight-year-old black playwright named Thomas Bradshaw has been taking on the idea of race in the theatre. At the same time, he has sliced open the pretensions of the white avant-garde with a wittily glistening axe. In his new play ... one can catch a glimpse of Bradshaw's anarchic gifts" ~ The New Yorker

"It's a striking, challenging piece that studies the abuse of power and the liquidity of morality" ~ YTheatre.com

"Likely to leave you speechless" ~ The New York Times