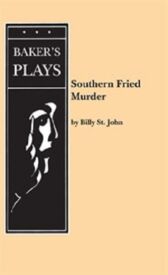 Way down south in Dixie, there's something's rotten in the cotton!

But when Mrs Capote is killed with her walking stick, mayhem ensues and her possible heirs become involved in a treasure hunt to interpret the encrypted will!

Actors are called to mill about the audience during pre-show as well as serving dinner to the dining room patrons!

Meals can actually be served during the show, or recipes can be substituted for food

The audience is totally involved in this mystery/comedy with one member actually recruited from the audience to play a small part, (this character gets beaten to death with a frozen chicken)

Suitable for both school and adult groups, from the author of our plays, Rubies and Thirteen Past Midnight