Somewhere - The Life of Jerome Robbins 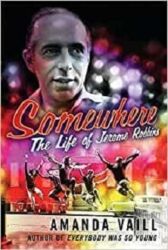 This is the first full-scale biography of what Time Magazine called a 'made-in-the-USA genius,' Jerome Robbins

On Broadway, Robbins virtually invented the concept musical in which music, action and dancing are woven into a seamless whole

His work includes The King and I, Pajama Game, Fiddler on the Roof, Gypsy and, most famously, West Side Story

Robbins was part of other important 20th century narratives - the grim drama of the McCarthy blacklist, the emergence of gay culture and the epic of immigrant assimilation

A guarded and secretive man, Robbins had virtually no magazine profiles and no biography in his lifetime, but in 1998 Amanda Vaill was given unprecedented and unique access to Robbins' letters, diaries and meticulously kept journals

This has resulted in a detailed, densely populated narrative with a strong and charismatic central figure - a book that makes readers feel that they are experiencing an extraordinary time for themselves